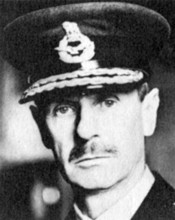 Educated at his father's preparatory school at Moffat and then Winchester, after which he entered the Royal Military Academy at Woolwich.  Failing to gain a commission in the Royal Engineers, he joined the Royal Garrison Artilliery.

He learnt to fly at the Vickers Flying School, Brooklands, gaining his RAeC Certificate (No 711 on 20 December 1913), on the day he passed out from Camberley, after 1 hour 40 minutes.  At the Central Flying School his instructor was Capt. John Salmond.  Having gained his 'Wings', he was added to the RFC Reserve List returning to his Garrison Artillery duties on the Isle of Wight.  In 1929, following the escalation of trouble in the area, he was sent to Palestine to undertake an inquiry into the need and form of possible re-inforcements for the area.

On 28 January 1936 he was one of three officers representing the Air Council at the funeral of HM King George V.

As Air Member for Research and Development he was in a position to oversee the development of the eight gun fighters (Hurricane and Spitfire), but even more importantly his previous experience in wireless experiments gave him an excellent insight into possibilities of it's use in the detection of aircraft.  He was able to take these preparations to their logical conclusion when given command of the newly formed Fighter Command in July 1936.  He immediately set about developing a system able to make best use of his limited resources and it was this system as much as anything that ensured success in 1940.  He established the coastal chain of radar stations (then known as RDF), but the success of radar really lay in the reporting and control system he set up which allowed aircraft to be placed in the right place at the right height in time to meet the threat.

During the Battle of Britain his most difficult problem was the conflict between AVM Leigh-Mallory and AVM Park over tactics in which he supported both Group Commanders and saw that both sets of tactics had their advantages but that they were not necessarily suitable in both situations.  From 1938 Dowding was advised of five separate retirement dates, but  each one was rescinded for various reasons, therefore, his replacement in November 1940 as AOC in C Fighter Command, when flush with success in the Battle of Britain was seen as a snub by many, although it had in fact been planned.