Numbered AuxAF/RAuxAF flying squadrons are detailed in the Squadron history section, including any current non-flying role.

Formed as Police Squadron, TPW, it was redesignated on ? and is currently based at Henlow.

No 2501 (County of Gloucester) Squadron 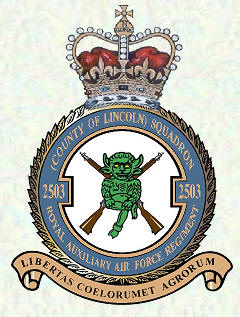 RAuxAF Regiment Field Squadron formed on 1 July 1979 at Scampton, currently based at Waddington.

No 2504 (County of Nottingham) Squadron

No 2608 (North Riding of Yorkshire) Squadron

No 2609 (West Riding of Yorkshire) Squadron 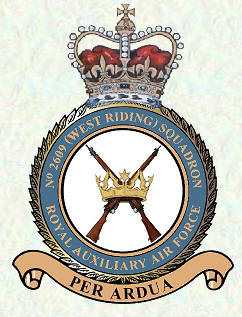 No 2612 (County of Aberdeen) Squadron

Formed as an RAuxAF Field Squadron on 1 March 1983 at Marham, it converted to the Operations Support role on 1 April 2000 and after serving at Ali Al Salem (Kuwait) and Basrah airbases during Operation Telic , re-roled back to a Field squadron on 1 April 2004, remaining at Marham.

RAuxAF Regiment Field Squadron formed on 1 July 1979 at Lossiemouth and still based there.

It was formed as a Field Squadron at Honington on 1 July 1979 continuing in that role until 1994 when it was disbanded due to Options for Change.  At this point a complete flight joined 2620 at Marham and another joined 2503 at Lincoln.  It later reformed as a training Squadron and took on the role of centralised Regiment Training for the Auxiliary force.  In late 1990 it re-roled again as a Short Range Air Defence (Shorad) unit the Regiment lost the Grounf Based Air Defence role when it re-roled again as part of the CBRN Joint Regiment and latterly 20 Wing RAF Regiment.

Formed as an RAuxAF Field Squadron on 1 November 1982 at Brize Norton, it converted to the Operations Support role in ? remaining at Brize Norton until disbanding in 2001 on being absorbed into the reformed No 501 Sqn RAuxAF.  It reformed at Brize Norton in early 2013.

No 2625 (County of Cornwall) Squadron

RAuxAF Regiment Field Squadron formed on 1 November 1982 at St Mawgan, where it remained until 1 November 2006 when it disbanded.

Formed as a Short Range Air Defence (SHORAD) squadron on 1 April 1985 at Waddington to operate 35mm Oerlikon cannons and Skyguard radars captured in the Falkland Islands during the war of 1982 but disbanded again in 1993.

No 4626 (County of Wiltshire) Squadron

Based at RAF Benson