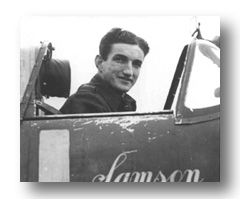 10 Dec 1946:          Appointed to Permanent Commission in the rank of Squadron Leader (retaining rank current at the time)

New Zealander.  His final total of victories was 20 confirmed destroyed, one shared, three probables and one shared probable and 13 damaged.  Took part in Suez operations.  Formation of No 215 Wing took place aboard HMS Ocean prior to moving ashore to Gamil of which he also assumed command.  As a result of his second marriage, he became stepfather to the Olympic swimmer, Duncan Goodhew.

Citation for the award of the Distinguished Flying Cross.

This officer has participated in a large number of operational sorties.  He has at all times displayed great dash and determination.  He has destroyed 2 and probably destroyed another 2 enemy aircraft.”

Citation for the award of the Bar to the Distinguished Flying Cross.

This officer has led his flight on many operational sorties with great skill and success.  Since being awarded the Distinguished Flying Cross he has destroyed a further 5 enemy aircraft bringing his total victories to seven.”

Citation for the award of the Distinguished Service Order

Since being awarded a Bar to the Distinguished Flying Cross, this officer has participated in a large number of sorties over enemy territory.  By his masterly leadership, exceptional skill and gallant example, he has imbued the squadrons he commands with rare zest for battle, combined with a high standard of operational efficiency.  Wing Commander Crawford-Compton, who has destroyed at least 13 hostile aircraft and damaged several others, has rendered most valuable service.”