Squadrons numbered in the 400 series were technically units of the RCAF, RAAF and RNZAF, but their members were placed under the operational control of the RAF  and are usually considered to be part of the RAF's organisational structure, hence their inclusion here. 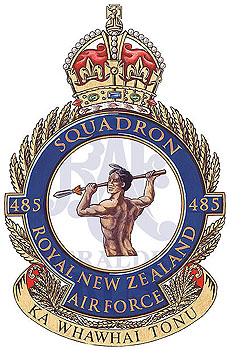 Formed as the first New Zealand fighter squadron in the UK on 1 March 1941 at Driffield.  It was equipped with Spitfire Is and remained in No 12 Group in Yorkshire until July when it moved south to Redhill, where it began to take part in offensive sweeps and Circus operations.

In October 1941 it moved to Kenley and operated from there and later Kingscliffe until October 1942, when it was sent to Northern Ireland for a rest, returning to Kingscliffe, still equipped with Mk V Spitfires the following month.

From July 1943, equipped with Spitfire IXs, it operated as part of the Biggin Hill Wing and from October as part of the Hornchurch Wing but this was short-lived as the following month it was sent to Drem in Scotland, where it remained (using Spitfire Vs) until Mar 1944.

Its return south coincided with the build up for Overlord and equipped with Spitfire IXs again, it joined No 135 Airfield on 28 March 1944.  Initially based at Hornchurch, No 135 Airfield, later renamed No 135 Wing, carried out dive bombing and tactical reconnaissance sorties prior to during and following the D-Day landings.

In August 1944 No 485 moved over to the continent and followed 21st Army Group through Belgium and Holland until February 1945.  It was then brought back to the UK to re-equip with Tempests, although these were replaced in March by Typhoons and then in April Spitfire IXs returned and the squadron returned to the continent, where it remained until disbanding at Drope on 26 August 1945.

Motto:  Ka whawhai tonu (We will fight on) 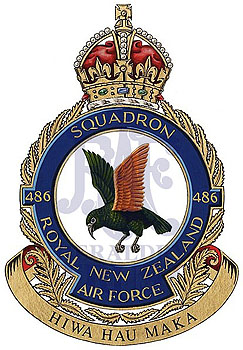 Formed at Kirton in Lindsey as the second New Zealand fighter squadron on 3 March 1942 in the night fighting role.  Initially equipped with Hurricanes it moved to Wittering, where it co-operated with the Turbinlite equipped Havocs on No 1453 Flight.  However, in July the squadron began to convert to the day fighter role and was re-equipped with Typhoons.

Moving south it participated in Rhubarbs, Ramrods and Roadsteads as well as the occasional night intruder mission until January 1944 when the squadron began to re-equip with the Tempest V.  This re-equipment was short-lived, however, as the Tempests were transferred to No 3 Squadron and it received Typhoons again.  Tempest arrived eventually in April and the squadron began training as part of 2 TAF, but a few days after D-Day, the squadron was transferred to defensive duties in an attempt to combat the V1 flying bombs now being targeted against the UK.

During the three month campaign against the V1, the squadron accounted for 223.5 V1s destroyed.  The squadron then returned to 2 TAF and moved on to the continent, ending the war in Denmark.  In July 1945 it moved into Germany but in September it returned to the UK and was disbanded at Dunsfold on 12 October 1945.

Formed as a light bomber unit within No 2 Group at Feltwell on 15 August 1942, it was equipped with Venturas, beginning operations the following December.  The Ventura was not an overwhelming success and on a mission against Amsterdam on  3 May 1943, it lost ten of the eleven attacking aircraft.  For his outstanding leadership,  Squadron Leader Leonard Trent, who was shot down and captured, was awarded the VC after the war.

Together with the rest of No 2 Group, No 487 was transferred to the 2nd TAF on 1 June 1943 and in August it began to receive Mosquito FB VIs.  In the next few months it was involved in a number of high profile precision low level raids including the attack on Amiens prison (18 February 1944), the Gestapo HQ at Aarhus (31 October 1944) and the Gestapo HQ in Copenhagen (21 March 1945).

In February 1945 the squadron moved to the continent until September 1945 when it was disbanded by being renamed No 16 Squadron (which was later changed to No 268) at Cambrai on 19 September.

Motto:  Ki te mutunga (Through to the end) 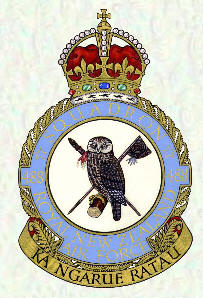 Formed in New Zealand at Rongotai in September 1941 flying Wirraways, it was sent to Singapore in October arriving the following month.   Re-equipped with Buffalos, it arrived at Kallang in time for the Japanese attack against the island.  However, its aircraft were totally outclassed by the Japanese fighters and by the end of January the squadron was forced to withdraw to Batavia.  However, once again it was fighting a losing battle and on 23 February 1942 it left for Australia, leaving its aircraft with No 243 Squadron RAF.

The squadron reformed at Church Fenton on 25 June 1942 in the night fighter role equipped with Beaufighters.  Sent to defend the Clyde area, the lack of enemy activity was relieved by occasional intruder missions carried out from bases in the south but in August 1943, the squadron received Mosquito XIIs and in September it moved to Bradwell Bay in Essex.

As part of the preparations for Overlord, the squadron was transferred to 2 TAF for night intruder operations, which it interspersed with night defensive operations against V1 flying bombs from June 1944.  A move to the continent came in November, where it remained until disbanding at Gilze-Rijen on 26 April 1945. 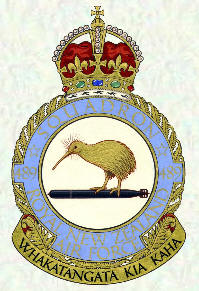 Formed at Leuchars on 12 August 1941 in the torpedo bomber role, it was intended to be equipped with Beauforts, but these were slow in arriving and from January 1942 the squadron used Blenheims IVs instead.   Three months later Hampden torpedo bombers arrived and the squadron moved south to Thorney Island, from where it also operated detachments at Wick and St Eval.

It carried out anti-submarine patrols, reconnaissance flights over Norway and torpedo attacks against E-boats and other surface shipping.  In August 1942, it moved to Skitten and then in October it returned to Leuchars, where it re-equipped with Beaufighters, taking them south to Langham in Norfolk in April 1944.  From here it operated along the Dutch, North German and French coasts as part of the Langham Strike Wing, but in October, the whole Wing re-located to Dallachy in Scotland, from where it operated along the Norwegian coast.

The squadron continued to take part in these operations until the end of the war and the following month, June 1945, it moved to Banff where it began to receive Mosquito FB 6s, but before it could become operational on these it disbanded on 1 August 1945.

Recently, a comprehensive history of the above Squadron has been completed in consultation with a team of 489 personnel, their families, and several researchers. It comprises approximately 300 pages of archival material, official and personal photographs, as well as reminisces by several 489 Squadron personnel.  This is no longer available but two further volumes are being planned.   If you are a former member of 489 Squadron, or their next of kin, and you wish to receive copies, please contact 489 Squadron Association: - 489squadronassociation@gmail.com

Formed at Jui in West Africa on 28 March 1943, in the maritime patrol role.  The squadron began operations in July and flew many long fruitless sorties over the South Atlantic. However, in August 1943, an aircraft from the squadron found the survivors of the Fernhill and later that month the CO attacked a submarine, damaging it.

Originally equipped with Catalinas, the squadron received Sunderlands in May 1944, which it continued  to use until disbanding on 1 August 1945.

Motto: Taniwha kei runga ( The taniwha is in the air)

Badges marked ** on this page are have been produced by Mary Denton on behalf of the RAF Heraldry Trust and are displayed on this page with the permission of the RAFHT.  Mary Denton and the RAFHT have probably completed half of the 'official' badges authorised but are still looking for sponsorship for the remaining badges. The work continues and details can be found on their website.